The dreaded tick box that transformed my life [STUDENT BLOG] 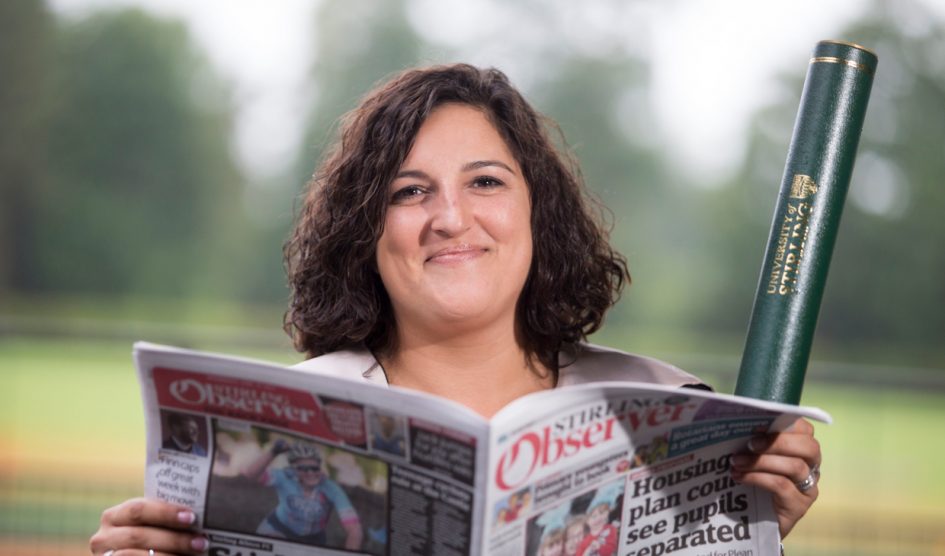 Shumela, 35, left school at the age of 14 with no formal qualifications and initially assumed that was the end of her academic journey. She joined the University’s Access Program and chose to stay at Stirling for the duration of her undergraduate degree. Today she shares her story.

Half-way during my Access to Degree Program at the University of Stirling in 2012 and like most other students on the course, I eagerly awaited my opportunity to complete my UCAS form and select my chosen academic pathway. However, as I progressed through that form, I eventually came to a page that stopped me dead in my tracks. The page asked me if I was ‘care experienced’? I had never heard this term before and really didn’t know what it meant. What came next, as the realisation hit was a whole array of emotions that I hadn’t felt in such a long time. I deliberated, I worried, I was fearful and I spoke at great length with my husband about all my concerns and what this might mean. Honestly, I was scared, scared that if I ticked that box that asked me if I was “care experienced”, I perhaps wouldn’t get into my chosen degree course. I know that may sound a tad over the top, but that really was how ignorant I was to my situation. I had been surviving life for a very long time just as I was and never knew there was actually a term for what I had experienced in my childhood and teenage years, it had just been my life – it’s simple as that.

After pausing my UCAS application for a couple of days and after much deliberation, I decided to tick the dreaded box. What then ensued has change my life profoundly and is ultimately what has led me to where I am now in my career, my hopes and plans for the future and most importantly, my healing journey.

A few weeks after I had sent my UCAS application away I received a very welcoming and informative email from someone who grew to not only be a fundamental part of my whole educational experience at Stirling, but a very good colleague and friend too. Tracey Kerr, Widening and Participation Manager, was the named contact for care experience students at Stirling and her role was to let me know what support was on offer for me and what opportunities there were for me to become more involved within the university. Since I had ticked the ‘dreaded’ box, I had begun doing some of my own research into this term ‘care experienced’ and found out that the Scottish Government was introducing legislation that would be called ‘Corporate Parenting Legislation’ and there was a new Children and Young Peoples Act currently being written. It was fascinating, all these legislators, charities and government bodies working to create mechanisms to protect and support people like me, people who had been in care as children and young people. However, as I got more and more information on what these new measures would mean I began to realise, with a little disbelief, that I wouldn’t be able to benefit from any of these things because I was over the age of 26.

So, when Tracey emailed me to say who she was, I got back to her straight away to tell her I was 29 and so she couldn’t help or support me and I thanked her for reaching out. Anyone who knows Tracey will know that things did not end there. She got back to me and said, “Well that doesn’t matter to us, we are still here to support you, regardless of your age.” Never has one email led to so much.

My relationship with Tracey just bloomed from there. She was a constant source of support, advice, guidance and friendship. She took me under her wing really and within a short time I was a student ambassador working out of the widening participation department. She also created an internship for myself and another student one summer and we worked collaboratively to introduce measures to compliment the corporate parenting legislation as it was being introduced on campus.

Tracey also identified very quickly that my strength was my lived experience. She encouraged me to understand the unique insight I had and how it could help others. She arranged for me to meet a care experienced student one day with another member of staff so we could take them on a tour of the campus and its facilities. Upon listening to my feedback on what that experience was like for myself and the new student she again very quickly identified that I knew much more about what a tour for a care experienced student should look like and so she appointed me as the care experienced student ambassador and allowed me to redesign that particular tour specifically for care experience students. I will never forget what that felt like. Being listened to and my ideas being so welcomed was a very new feeling for me and it gave me such a sense of empowerment. I will be eternally grateful for the many different things that Tracey did for me during my time at Stirling but I think the most significant thing that will stay with me is, how she not only listened to me, she actually heard what I was saying and she done something about it!

As well as the support I had from Tracey and the Widening Participation Team, I also received a great deal of other support at the University. Coming to university with a young family as a mature student was never going to be easy, especially financially. However, I was given the same financial support as care experienced students who were under the 26-year-old threshold. I was also offered 365 days a year accommodation in a lovely 3 bedroom flat on campus and did consider it, but ultimately decided to decline as it just wasn’t the best thing to do for my family at the time. However, to know that if we needed it, it was there, was a huge relief during my 6 years of study. The University also offered to be my guarantor should I need to move to another privately rented property during my studies – knowing this really helped me feel safe and secure for the remainder of my degree and should be something adopted by more universities in Scotland I believe. I also had access to counselling services, and I became deeply involved in the Student Union. So much so, that two years before I graduated, I and the VP of Education and Engagement campaigned to have the ‘Non-traditional Student Officer’ role introduced. This role provided representation to all non-traditional students, which care experienced falls under.

This short article cannot even begin to describe the transformation spending 6 years at Stirling has had on my life. When I think back to that day when I first seen the term ‘care experienced’ and think about how I deliberated and almost didn’t tick that box. I know I would not be where I am today and that I would not have been able to build and achieve what I have in the social enterprise, Resilience Learning Partnership I set up two years ago. My experienced at Stirling as a care experienced person has defined so much of what I now do myself in my own organisation. You set the most wonderful example of what true inclusivity is Stirling, thank you for being my gateway to a transformational second chance at life and all the beauty that comes with it.

Stirling is a place where potential and enthusiasm – not background – is valued. We want to help you realise your potential and our Access to Degree Studies course is the perfect place to start. Find out more here!