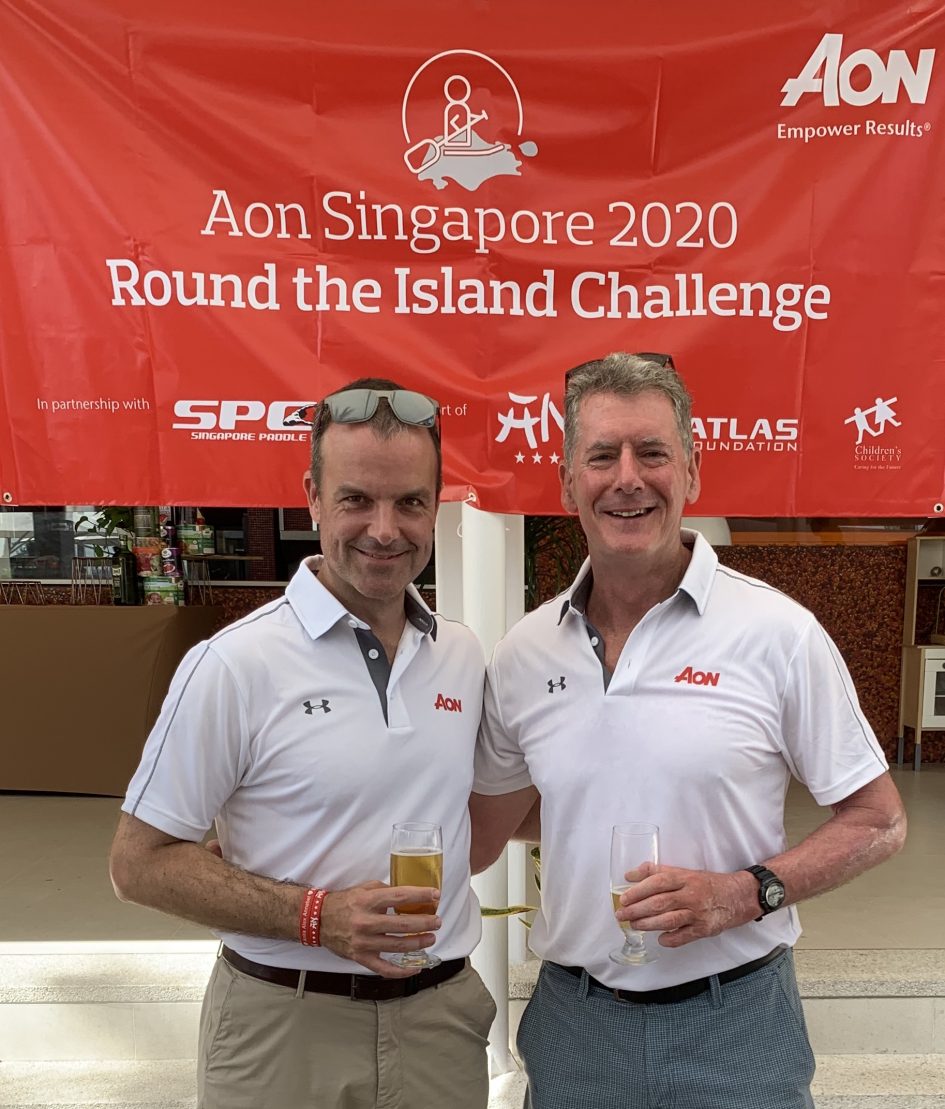 Since graduating from the University of Stirling 1981, alumnus Alastair Nicoll’s career with AON (a leading professional services provider) has taken him around the globe.

In 2017, he became Regional Director for the Asia Pacific area at Aon – and there, he found a new passion: dragon boat racing.

Boasting its origins in ancient China, dragon boat racing is a high-intensity water sport in which teams of rowers race short distances in an all-out sprint.

And while dragon boat racing was intense, it swiftly led Alastair to a new challenge: outrigger canoeing.

Unlike dragon boat racing, outrigger canoeing is a long-distance event (not a sprint) that takes place in the deep sea. Outrigger canoes (also known as Va’a canoes) have been travelling the waters of the Pacific for over 4,000 years – and the art of racing them as a sport developed in Tahiti and Hawaii in the 1800s.

We caught up with Alastair to find out more about his love of the sport, and how it featured in an astonishing charity event: the AON 2020 Round the Island Challenge.

After seven months of planning, fundraising and training, three outrigger canoes (each with six seats) paddled away from Sentosa island off the south shore of Singapore. Their goal: to attempt to circumnavigate Singapore to raise funds for children’s charities in Singapore and Sri Lanka.

Alastair explained that “the Sri Lanka connection is through Ben Nicholson, who lost his family in the Easter 2019 bombings and who formed the Atlas Foundation. We were extremely motivated by his presence in our group”.

Following a “generally fun” training regimen, the crews became proficient and much fitter. They endured two-to-three sessions weekly and three long sessions building up to the Challenge distance of about 140 km. By race day, their aggregate training distance hit 14,000 km.

Alastair put this into context for me by describing it as “the same as the distance to Stirling, up the River Forth!”

On Friday 13 March at 4pm, support boats and the three canoes set off east among an armada of other canoes from local clubs – all of which were there supporting the AON Challenge.

The intention was to share the work. Each canoe had two crews doing alternate shifts of between 60 and 90 minutes and then swapping over quickly in the sea. One crew would jump out and the other would then climb in, giving exhausted paddlers an opportunity to refuel and be ready for the next shift.

Darkness came around 7.30pm, but under a bright sky and with lights on both sides of the channel, the crews sped up the coast following a support boat at about 10k/h.

The main logistical challenge was around border control, which maintains a no-paddling zone even in the middle of the night.

This meant the crews couldn’t paddle around, but had to do the north section on land, lifting the boats out of the water and loading them on to a truck. That might sound easy – but each canoe weighs about a ton, and launching the boats again was tough due to the rocky stretch of coastline.

The boats were beached at about 11.30pm, and in all it took over 3 hours to handle all the land operation.

Alastair’s crew were spurred on by music in the canoe.

“Our final session started around dawn, with the anthems of our crew’s four countries: South Africa, England, Wales and started with Flower of Scotland,” he said.

“What a great boost to spirits as we were tiring fast!”

They completed the event just after 9am and fittingly, all three canoes crossed the line together to a large cheer from the support boat. They were hours ahead of schedule, completing the event in 17 hours 10 minutes – a Singapore record!

As you’d expect, there was an after-party for 150 at a beach bar from 3.30pm. That gave the canoeists time for a couple of hours’ sleep before celebrating, and definitely helped energy levels for the evening ahead.

A short nap aside, this had been a long 36 hour ‘day’, blessed with perfect conditions, no serious injuries, fantastic memories and over $200,000 raised for the chosen charities.

The charity funds are still open. You can find out more and donate here.