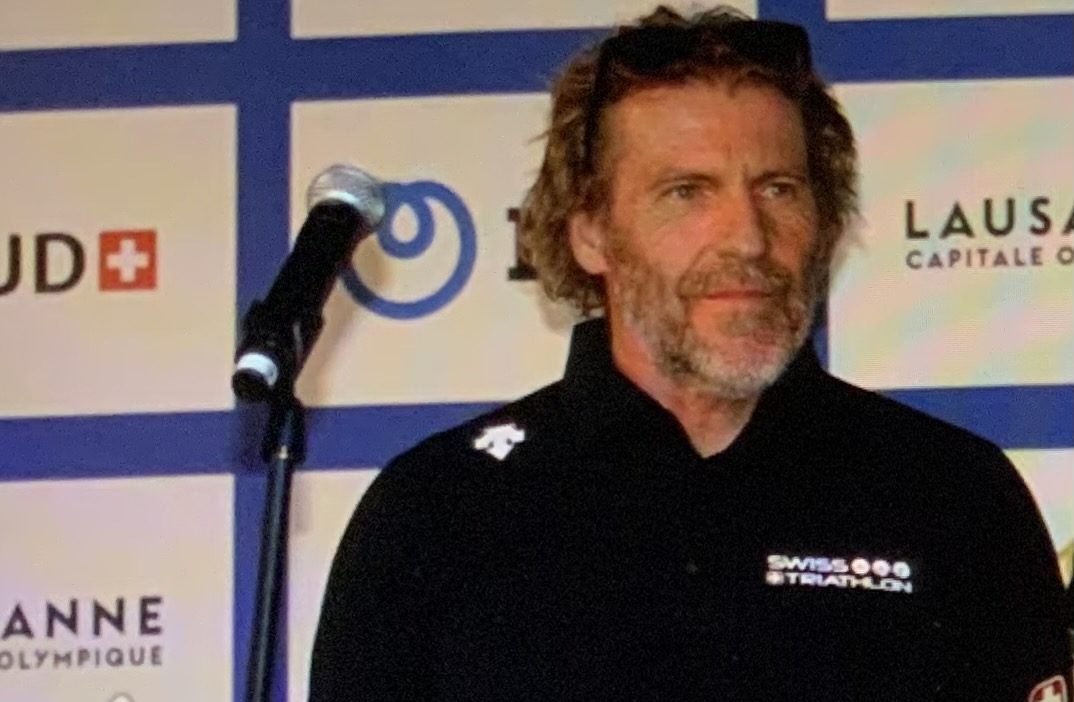 We caught up with National Coach for Swiss Triathlon Gordon Crawford, who graduated with a Masters degree from the University of Stirling in 1997. Since graduating from Stirling, Gordon has not only worked with Swiss Triathlon, but also coached with Triathlon Scotland, Triathlon Ireland, the Welsh Sports Council, British Triathlon and more. Gordon’s Swiss U23/Elite team is currently preparing to compete at the Tokyo Olympics.

Why did you choose to study at the University of Stirling?

I chose Stirling because of the reputation of the University, especially the Education and Department of Sport. The Med offered options in PE, Sport and education and I was lecturing at the time.

What practical skills did you gain from your course which have been valuable for your career development?

The main skills I gained were learning the academic rigour of reading, researching, planning and presenting balanced arguments for discussion; reflecting as a practitioner; the ability to be a critical and innovative thinker; management of time; working and collaborating with other professionals and learning from shared practice.

What activities did you find helpful while you were at Stirling?

When I started my Med at Stirling, I was already on my sporting career path with competing, coaching and lecturing. I really enjoyed the workshops and the small group working — especially seminars. But the main part was the learning, discussion and having my thinking challenged my Med supervisor, Peter Billsborough. How Peter approaches things and the attention to detail are things I carry still with me now. My wife also supported me with excellent careers advice and still does.

How did you get started in your career?

I competed in swimming initially, and then competed for Scotland at endurance running before moving into coaching with Scottish Athletics. I was a former National Event Coach for Steeplechase and Endurance before I moved into Strength and Conditioning with Glasgow Warriors and Scottish Rugby when the game went professional. Whilst working in the physical prepartion for rugby I was still coaching athletics and got involved in triathlon through Stirling Triathlon Club, I am still a member now.

After I left Scottish Rugby, I began work in sports development but in my own time became very involved in triathlon coaching at my local club as a volunteer, coaching Scottish, British and Irish elite triathletes at National, international and World level. I did work with Triathlon Ireland and coached a former alumni Gavin Noble.

In 2014, I set up my own Coaching business and developed a Triathlon Programme with Beaconhurst School that linked triathlon with the school to develop better learners, role models in the school whilst training and competing at triathlon. I combined this with working with Scottish Football and, ultimately, Motherwell Football Club in Physical performance. It was varied work with my own business, but I developed a very successful triathlon squad based at the University of Stirling which involved elite Scottish/British Triathletes, the University Triathlon and Athletics Club too.

During this time, another former student, Grant Sheldon, won the World University Games in Nyon, 2016.

What is your current job? What does the role involve?

I am currently Swiss Triathlon National Coach, Elite and U23 which I have been doing since 1 April 2018. The key aspects of the job are:

How did you get involved in triathlons?

I started swimming at my local triathlon club, Stirling Triathlon Club, and then got involved with the club by training and coaching. I am still involved today. It is the club that has provided me with the opportunity to coach and develop my ideas on coaching swim, bike and run. It was as a volunteer coach that I began to develop the junior section at the club and influence young athletes and the training, whilst encouraging parents to become coaches.

Congratulations on the Swiss triathlon team qualifying for the Olympics! How did you feel when you knew the team would be going to Tokyo?

It was great to know that the team had qualified four spots: two men and two women for the Tokyo Olympics. We will have two men and women racing in the individual event and the Mixed Team Relay. I have spent the last three-and-a-half years developing a team ethos, spirit, history and culture with the Mixed Team relay.

It took 12 different athletes during the qualifying period to get the team selected. I gave my pre-race team talk based on my experiences when working in rugby and was influenced by the great Scottish Coaches Ian McGeechan and Jim Telfer. The Swiss are very similar to the Scots, and are tough and very resilient.

What are you looking forward to most about going to the Olympics/Japan?

I know that this Olympics in Tokyo will be special, and it will be very restrictive. There is a lot of time in isolation, other than training as was my recent experience in Yokohama.

These games will present a coaching challenge like no other in terms of the restrictions, the very tough climate and course. I like the challenge as a coach to work with the best athletes and coaches, but I also enjoy the competitive battle with the other nations at the big competitions.

This is great learning and provides the opportunity to get better.

What is your favourite memory of your time at the University of Stirling?

The campus, the facilites, the challenge of the course, whilst working and the other students on the course.

If you could give current Stirling students, who are thinking of pursuing a similar path to yours, one piece of advice what would it be?

Be brave, courageous, resilient and make things happen rather than waiting for things to happens. A career in sport is not a straight path. Don’t forget where you started and the people that have helped you on the way.

“I truly believe that everything that we do and everyone we meet is put in our path for a purpose. There are no accidents; we’re all teachers – if we are willing to pay attention to the lessons we learn, trust our positive instincts and not to be afraid to take risks or wait for some miracle to come knocking at our door.”

Interested in pursuing a career in sport? The University of Stirling is Scotland’s University for Sporting Excellence. Check out our range of undergraduate and postgraduate sports courses.