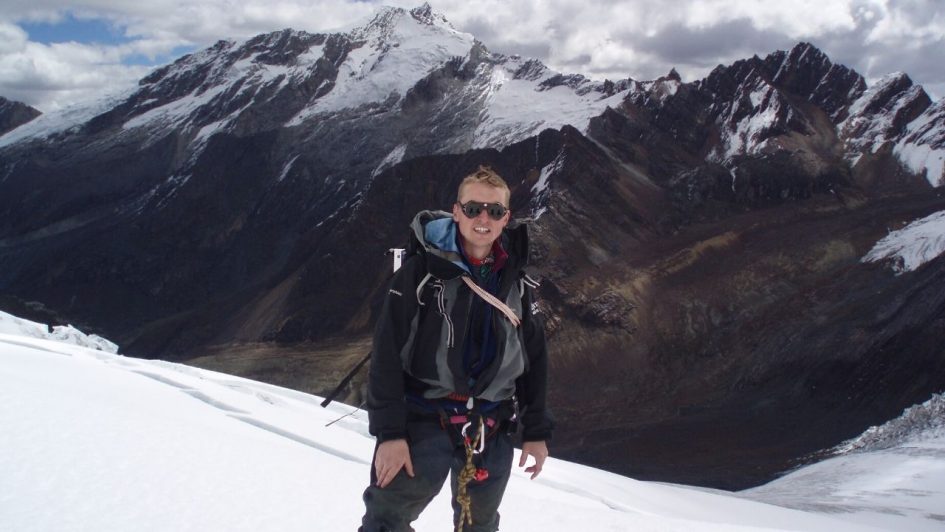 Mike Robinson (BA Business Studies, 1988), CEO of Royal Scottish Geographical Society (RSGS), caught up with Kerry Bryson to discuss his time at the University of Stirling and finding his passion about protecting the world we live in.

Tell me about your time at Stirling

Extremely positive – friendly and fun.  Due to dad’s job, we had travelled a lot and coming to Stirling was the first time that I established roots.  I wasn’t an elite athlete but I enjoyed sport, and joined 14 sports clubs with my favourites being squash and canoe polo.

The canoe polo club hired a minibus to compete in the UK university championships in central London.  It was a 12-hour journey but we figured it would be good practice for the Scottish competition the following week.  We hadn’t realised that it was a straight knockout so within 10 minutes we were back on the bus heading home!

Another memorable occasion was the newly established American Football team’s first match.  We rocked up in shorts and t-shirts, whilst our opposing team, the University of Glasgow, had secured a grant for all the gear, kit and metal helmets – squaring up to them was daunting, but true to Stirling form we still beat them!

But perhaps my favourite story was when I was persuaded last minute to help some friends competing at a Scottish University Athletes tournament in Falkirk.  On the bus, it was explained that the elite athletes would concentrate on their sports, and that I would be the sole competitor across 12 other events in order to get additional entry points.  I’d seen the hammer throw and pole vaulting on television, that’s all, so little wonder I kept fouling.  On the latter I bottled my first attempt, did pretty well in my second after some coaching from the side, thought I was a natural, but my bravado failed on the third attempt and I found myself hanging at the top of the pole with the crowd urging me to jump onto the mat.  Instead I fell onto the concrete, broke my arm.  Later that night, and buoyed up on painkillers, I met fellow student Katriona, who would go on to become my wife.

I did the milk round like everyone else but the next step was not obvious to me.  I ended by taking a sales and marketing job with Unilever, but only during a leave of absence to join a Raleigh International project in Borneo, did I realise my core strengths, passions and career goals.  Volunteering, project management, fundraising and the environment.

My next job was with the RSPB (Royal Society for the Protection of Birds) where I worked for 10 years before moving on to the Royal Botanical Gardens in Edinburgh where I led on the fundraising to create the John Hope Gateway Biodiversity Centre. I’ve been CEO of RSGS since 2007.  My experience with Raleigh had had a profound effect on me.  I took my first board position with them, partly due to a promise to Felix, a friend in Borneo, that I’d help protect the forest and his environment.

Climate change is one of the biggest threats to human existence, and I realised that one way to effect change was to accept other board positions on organisation and charities to keep the agenda cohesive.  It was a huge privilege to chair the Stop Climate Chaos Scotland (SCCS) coalition of over 40 organisations, which secured the Scottish government commitment to a 42% reduction target by 2020.   The crux was to form a coalition that was credible to politicians, could agree a common agenda and set of aims that would win public support, and collaboratively campaign together on climate change.  It was a proud moment when the Climate Change (Scotland) Act was passed unanimously by the Scottish Parliament on 24 June 2009.

Scotland continues to lead the way in implementing change.  On 25 September, the Scottish Parliament voted to support a Climate Bill that commits Scotland to net zero emissions by 2045 and, agreed to a 75% reduction of greenhouse emissions by 2030.  What do we need to do next?

I think we need to reimagine the way we do things.  Let’s take transport as an example.  Rather than take the car to work I prefer to cycle or run, taking a slightly longer scenic route from the house that takes me away from cars and through an area of outstanding beauty.  It reduces my own carbon footprint, helps me destress so is good for my physical and mental health.  A train journey to London enables me to do four hours of work, a benefit not afforded through flying.  Or opting to travel by train to Europe for the family vacation means the holiday begins almost immediately after leaving the house.

Each of us can make small changes in our lives that will make a difference.  However, as a society we also need to address what I call “strategic transnational change” by which I mean that is it too easy to object to change.  As Robert Redford once said “climate change is in everyone’s back yard” and it is true that if we set a vision, and agree an ambition, then each of us must also give permission for that change to happen, without objections and barriers.