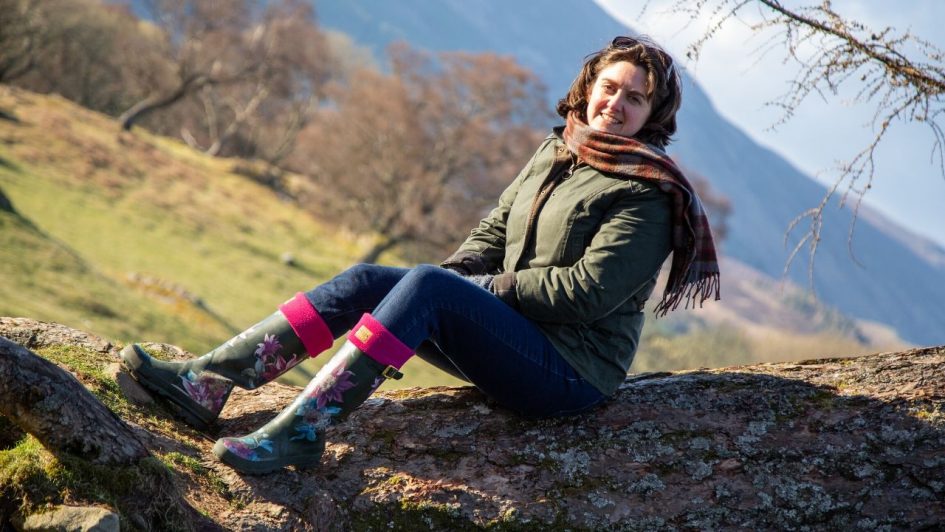 As an Outlander enthusiast and heritage buff, alumna Séverine Peyrichou (MSc Environment, Heritage and Policy, 2017) has a deep connection to the show. We caught up with her to ask about her experiences on and off set!

Séverine’s first experience of Stirling was during her semester abroad in 2001 as an exchange student from the prestigious Sciences Po in Paris, when a module in medieval history ignited her passion for the subject – especially its on-screen portrayal. While learning about the truth behind Braveheart, her enthusiasm for film tourism flourished and gave her a lifelong love of Scotland.

Back in France, Séverine completed her studies and began working as Head of the French Section for the Franco-American Fulbright Commission. As a fan of Diana Gabaldon’s popular series of books, Outlander, Séverine was delighted to hear that a TV show was being made – especially when an image appeared on social media of a curiously familiar filming location!

Stirling wasn’t mentioned, but Séverine recognised Dumyat immediately: “I knew that view – that was my bedroom view from Alexander Court!” As Outlander grew in popularity, so did the profile of star and Stirling honorary graduate, Sam Heughan, who used his fame to promote his philanthropic endeavours with My Peak Challenge. This initiative encourages members to step outside of their comfort zones in pursuit of better health, wellbeing and confidence, while raising funds for life changing causes. Séverine is a proud Peaker who swears by the positive impact of the programme.

Outlander’s arrival at Stirling contributed to Séverine’s return. Having learned of the newly introduced MSc in Environment, Heritage and Policy, she was decided to follow her enthusiasms and return to the University. She gave up her job, her apartment and her independence to return to halls…and fell in love with Stirling all over again. Séverine explored the significance of Scotland’s role as a location for so many films and television series for her dissertation, entitled “Heritage Though the Lens: The Impact of Filming and Film Tourism on Protected Spaces in Scotland”. Despite the thorough interrogation required for her academic work, she remains a committed Outlander fan.

While writing her dissertation, she began working with Mary’s Meanders, a tour firm who provide guided excursions around Scotland’s sites of historical interest – especially those used on screen. Séverine has continued in her role as a guide, enjoying the opportunity to share her enthusiasm and knowledge with eager fans. The attitudes and impressions of those on her tours informed her dissertation, and as a fellow fan of the show she loves the enthusiasm of her groups, beautifully describing the powerful impact exploring Lallybroch [Midhope Castle] has on visitors.

This dissertation led to the opportunity to shadow the University’s commercial services during the scouting process on campus for Outlander. After graduation she began working at the University in the student programmes office, and studied for a film location course. This led to an internship with Film Birmingham, where Séverine faced a steep learning curve – on her first day she was tasked with scouting for a seventies interior location in the city.

With Outlander filming on her doorstep, Séverine relished the opportunity to visit the set with a friendly circle of fellow enthusiasts. When she watches the show now, the technical knowledge she has gained of production allows her to understand the ways campus and other filming locations were convincingly transformed. The friends she made also shared a love of baking, and had formed the Outlandish Bakers– much to the delight of cast and crew! The group started as an informal picnic, and then they started delivering to set. Star Catriona Balfe has described the Outlander Bakers as “amazing”, and commented on the particular fondness for peanut butter cookies on set. The recipes for their most popular creations were compiled and sold online to raise funds for an autism charity – you can follow the Bakers’ adventures on Twitter and Instagram!

Séverine left the University earlier in March 2019 to take on a role with the Heritage Lottery Funded Rediscovering the Antonine Wall Project. As Project Development Officer she works tirelessly to raise awareness of the Wall and its heritage by engaging volunteers, communities and visitors in creative, interactive history sessions. While the ambitious plan to deliver 30 projects over the next three years will certainly keep her busy, Séverine hasn’t lost her love of film tourism, and she is in the process of launching a consultancy firm for the industry with a friend. Heritage Meets will support filming locations to meet visitor expectations. The initiative has been shortlisted for the Converge 2020 KickStart Challenge – an early-stage entrepreneurial development programme to help academic innovators transform their ideas into commercial successes.