Outlander Locations at and around the University of Stirling 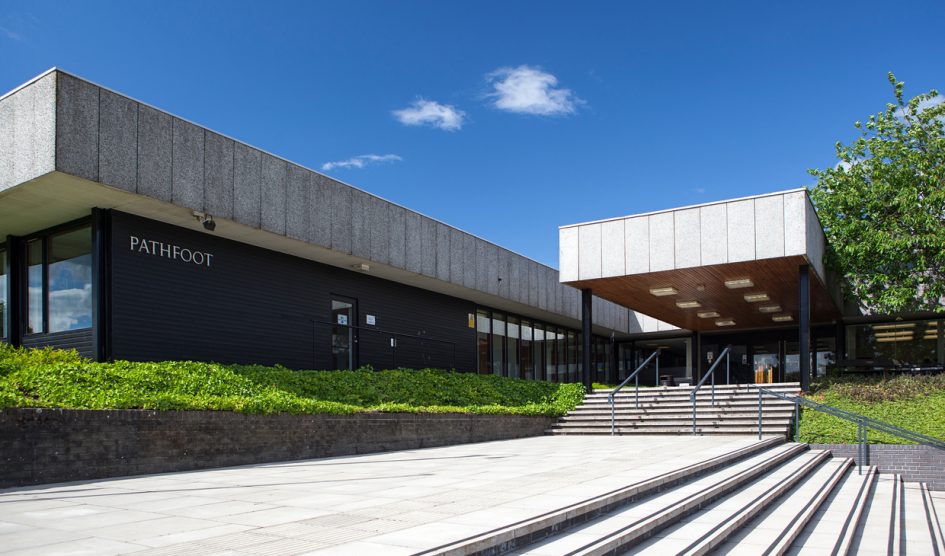 Castle Leoch. Craig na Dun. Lallybroch. Anyone who has seen the successful TV series Outlander (Starz Network) knows these places and the role they play in the magical love story of Claire (played by Caitriona Balfe) and Jamie (played by Sam Heughan, who recently became an Honorary Graduate at the University of Stirling).

Much of the Outlander filming locations can be found at and around the University of Stirling, so from here it’s easy to walk in the footsteps of your favourite heroes and villains!

Constructed in 1967, the Pathfoot building was the first to be completed on the new campus and is now a listed building. It is the first building you see, on your left on the hill, as you enter the University of Stirling Campus by the main entrance.  It makes an appearance as “Inverness College” in season two of the series!

The walkway between the Atrium and the Cottrell building – well-known to all University of Stirling students – was used as a walkway at Boston Airport in season four of the series.

Situated at the edge of our campus, there is a derelict cottage with a lovely view of Dumyat in the background. This location was used as a village in season one of the series.

Doune Castle, only a 15-minute drive away from our campus, played a leading role in the series. It doubles as the fictional Castle Leoch in season one of the series, home to Colum MacKenzie and his clan in the 18th century.

Doune Castle is a popular filming location as it has also been used for the films Ivanhoe and Monty Python and the Holy Grail, as well as for the popular TV series Game of Thrones.

Just a stone’s throw away from Doune Castle on the River Teith, and at the gateway to Loch Lomond & the Trossachs is the Deanston Distillery. Previously housing a cotton mill, it started in 1785 as a cotton gin. It changed to whiskey production in 1965. The distillery doubles as the wine warehouse owned by Jamie’s cousin, Jared, at the docks in ‘Le Havre’ in season two of the series.

Mine Woods in Bridge of Allan, a lovely mixed woodland with a lot of beech trees, has recently been spotted as one of the filming locations for the next season of the series.

If you’d like to follow the footsteps of your favourite Outlander characters on your own tour of these places, then any time is a good time, you’re always welcome to visit!

I'm a #UofStirling Alumni and keen content creator – you can usually catch me snapping photos or filming videos around campus!

© 2021 University of Stirling — Powered by WordPress