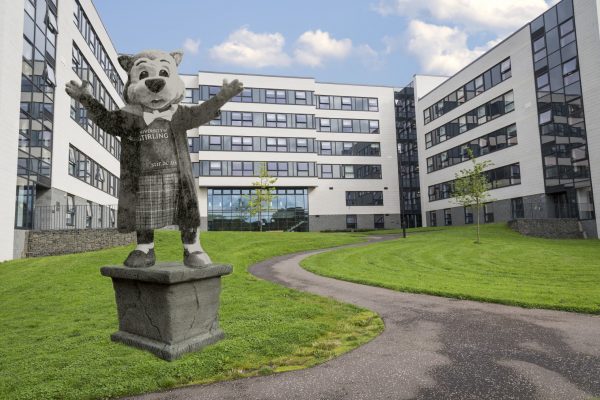 The University of Stirling is pleased to announce the unveiling of a dedicated statue celebrating its iconic mascot, the Stirling Squirrel. Plans to erect the 18-foot, hand carved granite constructed statue have been in the works for several months and have been a well-guarded secret, until now.  The statue managed to secure funding after a successful GoFundMe campaign was launched online, with donations from local businesses and several ‘high profile’ private individuals all backing the project.

The statue will commemorate the Stirling Squirrel mascot being officially recognised as the ‘Number 1 University mascot in Scotland’ and ‘2nd in the world’ in the Bantshire International University Mascot Rankings.

An official ceremony to unveil the statue will be held on campus later, with an inscribed gold plaque at the base of the plinth, which is rumoured to reveal the Squirrel’s name.

A spokesperson for the University said: “The University of Stirling has a renowned international reputation and a famously welcoming campus community. No one embodies this more than our beloved squirrel, who will now be a permanent fixture on our campus, a welcoming sight for generations of students who are yet to step foot on our wonderful campus.”

Enquiries have already been flooding in from all over the world as people are keen to travel to see the squirrel ‘in the fur.’