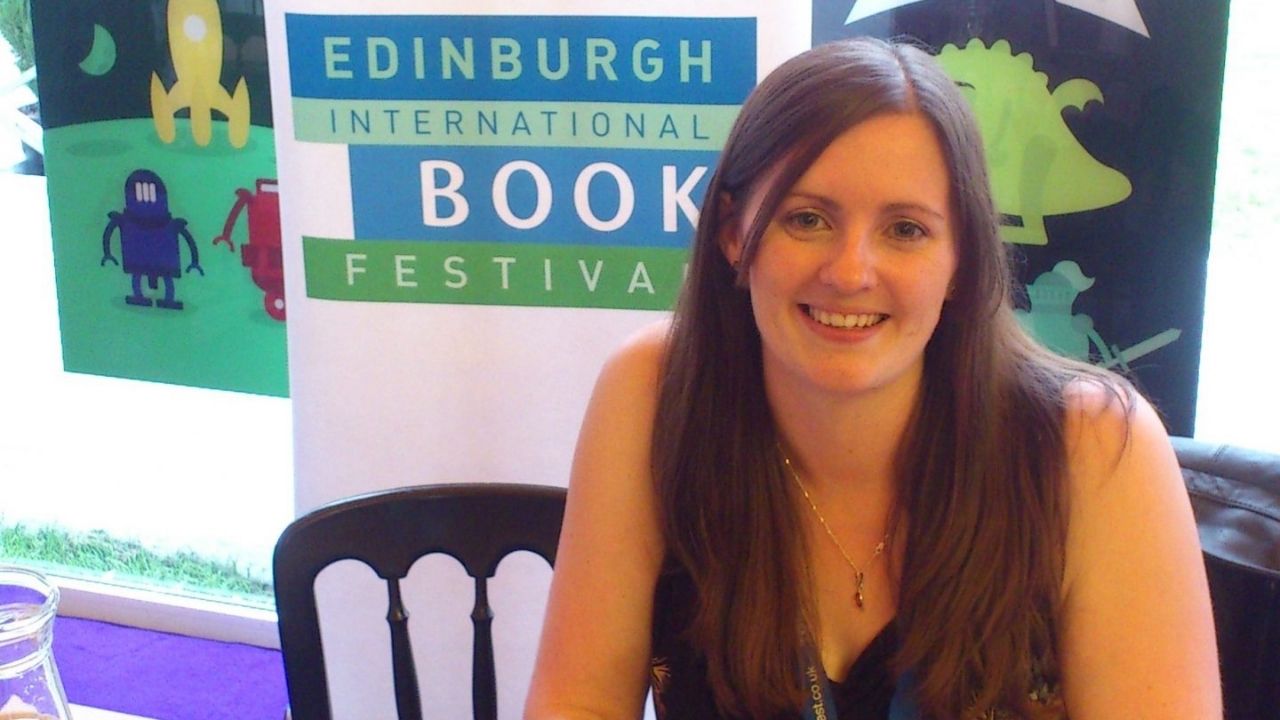 We caught up with Scottish author Claire McFall, who studied Film and Media Studies at the University of Stirling from 1999 to 2003, to chat about her time at Stirling. Her first book, Ferryman​, won the 2013 Scottish Children’s Book Award, was short-listed for the Grampian Children’s Book Awards and nominated for the Carnegie Medal. The Ferryman series has now been translated into more than 15 languages, sold in excess of three million copies and the film rights have been bought by Legendary Entertainment.

Why did you choose to study at the University of Stirling?

The campus itself was a big deciding factor. I was only 16 when I started university, and I loved the fact that it existed almost as its own little world, rather than some of the universities in Glasgow and Edinburgh that are bang in the centre of the city. It’s also beautiful, I loved walking over the bridge over the loch every day, with the trees all around. I remember a gorgeous morning in my final year when I was walking up towards the Cottrell Building from Spittall Hill, and the frost on the trees created an incredible icy canopy.

On a more academic note, the University of Stirling had the best media studies degree programme that I’d seen in Scotland, so there was really no contest.

What did you enjoy or find most useful about the course you studied?

The textual analysis elements of the course were the most useful when I moved into teaching English, which I did for ten years. I taught Intermediate 1 Media Studies, but I also created and introduced a lot of media units into my English classes.

The most fun I had was working on a small group project advertising milk for a local company. We thought we had planned out our television advert with the utmost professionalism, then discovered when we had the camera in our hands that there were about a million things we hadn’t thought of – and exactly what it felt like to be the person in front of the camera! It was a bit calamitous, but I enjoyed the challenge of problem solving, and we were really pleased with the end result.

What activities outside the regular curriculum did you find helpful while you were at Stirling?

I was very shy when I was younger – possibly because I started university when I was still 16 and I was very aware that I was younger than everyone. The social clubs were a great place to meet people because there was an activity going on, it wasn’t just (gulp) turning up and having to talk to people. I really enjoyed the tap-dancing class that I took in first year. I’d never done anything like that before, and it was a lot of fun. I also made a lot of use of the amazing swimming facilities at the university. I was in a swimming club throughout most of high school, and while I didn’t feel quite good enough to join the university swimming club (I regret being too wimpy to do that), I swam several times a week. It was a great way to relieve stress and to help my brain unstick whenever I was struggling with an assignment.

What is your favourite memory of your time at the University of Stirling?

Technology has moved on an awful lot since the (cough) twenty years it’s been since I left the University of Stirling. One of my favourite memories is also probably incomprehensible to students there today. I was doing a group project in Radio and we were making a thirty second radio advert. We’d recorded it, and were editing by taking the tape – yes, tape – and slicing it with a razor blade and then sticking it back together again with a tiny strip of Sellotape. It’s hard to compare that with current digital programs that can do in a flash what took us hours, but I have very fond memories of turning the dial a millimetre at a time, trying to catch the exact moment I stopped talking so we could splice it up.

What practical skills did you gain at the University of Stirling which have been helpful in your career development?

As I mentioned before, the analysis skills I developed on the Film and Media Studies course were very useful in the decade I spent teaching English in secondary education. I also spent a year and a half doing Business and Marketing in first and second year, and that, along with the units I took in advertising and branding, have helped me position myself in the marketplace and understand the importance of how I present myself, because in a way I’m a product as much as the books are.

What are you doing now?

I have retired from (escaped) teaching and am now writing full time. Being an author is essentially running a small business. I spend about a third of my time creating, and the rest is spent doing promotion and marketing, or working on contracts and admin. I’m also doing a Creative Writing Masters because… why not? I’m a big fan of lifelong learning, and I enjoy challenging myself. I may or may not have a quiet eye on a PhD in the future.

If you could give current Stirling students, who are thinking of pursuing a similar path to yours, one piece of advice what would it be?

Rome wasn’t built in a day. Everyone has heard about the writers’ game of how many rejections did you get. I got ten; I got twenty-four. I got seven hundred and fifty-nine… Well, it’s true. Being a successful author is less about being a brilliant writer (although that helps) and more about persistence, resilience and fortitude. It’s important to learn your craft, it’s important to learn about how the industry works and it’s important to hang on it when it seems like everyone is saying no to you. Also, expect to have another job while you do this, because it’s fun to eat and have a roof over your head.

What authors do you admire and what have you read most recently that stood out?

I love anything by Susanna Kearsley because she just brings such warmth to her writing. It’s like sliding into a hot bubble bath and relaxing every time I open one of her books. I’m just starting Belleweather, it’s the first book I’ve been able to concentrate on reading since the very first lockdown.

A YA book I recently enjoyed was Ghost by Helen Grant. It’s a chilling mystery that really drew me in. I finished it and thought, I wish I’d written that!

What book do you most often recommend/gift to others?

Noughts and Crosses by Malorie Blackman. It’s actually the first book in a series of five – the fifth book, Crossfire, was just recently released – and there was a television production of it last year, too. The first book is my favourite, though. I fell in love with it when I came across it during my teacher training, even though parts of it had me in floods of tears. I’ve taught it a few times, though it’s quite long, because I just loved seeing the pupils go on the journey with the characters.

Can you tell us anything about what you are working on at the moment?

The pandemic has been a funny time. I’ve vacillated between being incredibly productive, and then spending weeks and weeks not wanting to do anything. In that time, though, I’ve managed to get four new manuscripts to the stage of submission. I have a paranormal thriller, a high fantasy, a time slip ghost story and an oracle story. Something for everyone!

What you think contributed to the success of Ferryman in China?

I’ve had the fortune to go to China a few times to connect with readers there, and there are a few answers that come up most frequently. The first is that they love reading. Books and education are highly valued in China and they have a lot of incredible libraries and bookstores. Another part of the appeal of Ferryman is that it is set in Britain, as there is a real interest in UK culture in China, and the book provides a window to a slice of British life. There’s also a cultural similarity in the mythology in the book. Ferryman is a retelling of the Greek myth of Charon, Hade’s ferryman, who brough souls to the underworld. In China, they have the Black and White Impermanence, two ghosts who perform a similar service.

The biggest reason, though, is also the simplest. Readers tell me what they love the most is the relationship between the two main characters, Dylan and Tristan. Everyone loves a good romance!

As you have travelled to China several times what do you enjoy the most about your Chinese fans?

They are so enthusiastic! My first trip out to China in 2017 was mostly to meet my publishers, experience Chinese culture and do some media interviews. We stayed in Beijing for that trip, and we only did one book signing. I was *so nervous* that no one would show up and that I’d be embarrassed in front of my agent and my publisher because, although the book was very popular in the country, I was a foreign author and I wasn’t sure they’d be interested in me.

When we got to the bookstore, it turned out I needn’t have worried. It was absolutely mobbed, and they had to take me through the delivery entrance to get me in, because the entrance to the store was jam-packed. I did a twenty-minute interview with Caroline, my lovely translator who was very patient with the fact I kept forgetting to stop for her, then I met and signed books for around fifteen hundred fans. I was totally wiped afterwards, but the store staff started bringing out all these boxes. It turned out they had another fifteen hundred copies for me to sign for people who weren’t able to get a ticket but were desperate for a signed book. I definitely had hand cramp that day. It was totally worth it, though. Everyone I met was so nice and kind, and a lot of them had learned their favourite quotes in English to say to me. I left the bookstore feeling so loved.